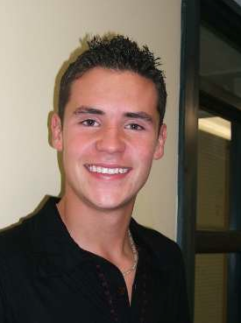 Stephen John Bernard or 'Stevie B' as he was affectionately known by all who loved him, was tragically killed in a car accident on the 2nd November 2005. The crash happened on the A27 near Chichester and also cost two of Steve's fellow university colleagues their lives﻿.

Steve was loved and respected by all who met him, the sheer number of people who turned up at St Marks Church for the funeral is testament to his character. Steve will forever be remembered by all of those who were lucky enough to meet him and is greatly missed by all.﻿

Steve will be fondly remembered for his love of sport and in particular football, for which he had prestigious talent. He graced football pitches as far away as Ipswich but there are two local clubs which he held particularly close to his heart. The Grange, at Bournemouth Sports Club, was the team with which he flourished as a youngster.

At 16 Steve signed for Christchurch FC following a flurry of offers from around the county. He played some of his best football at Hurn Bridge and he will be greatly missed by all those at the clubs which helped turn him into the fine footballer he undoubtedly was.﻿